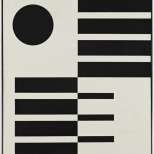 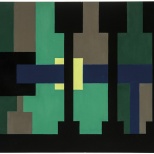 John McLaughlin came to painting relatively late in life and was self-taught.  While a few of his earliest paintings were still lives and landscapes, the remainder of McLaughlin’s work were abstracts. His work was characterized by simple and precise geometric forms, and from 1952 onwards, McLaughlin removed all curves from his work. A deep interest in Japan and Buddhist thought informed his strictly geometric paintings with what he termed “neutral structures.”

“My purpose is to achieve the totally abstract. I want to communicate only to the extent that the painting will serve to induce or intensify the viewer’s natural desire for contemplation without benefit of a guiding principle. I must therefore free the viewer from the demands or special qualities imposed by the particular by omitting the image (object). This I manage by the use of neutral forms.” –John McLaughlin

‘Having privately studied painting in Japan while serving as an intelligence officer from 1940 to 1945, McLaughlin was immediately taken by the paradoxical simplicity of means found in Zen painting. Taking his influence from the scroll paintings of Sesshu Toyo (1420-1506)—a Rinzai priest who traveled from Japan to China where he studied Northern Song and Ming Dynasty paintings—McLaughlin sought an alternative to Western painting. Here he acculturated Sesshu’s use of the “marvelous void” as a fertile ground for making abstract classical painting.’ -Robert C. Morgan, John McLaughlin: Paintings 1947-1974, The Brooklyn Rail, April 3,2013

McLaughlin was included in Jules Langsner’s landmark exhibition “Four Abstract Classicists” at the San Francisco Museum of Art in 1959, along with his peers Karl Benjamin, Lorser Feitelson and Frederick Hammersley.  Langsner, who coined the term “hard-edge painting” in his catalogue essay from the show, also described Mclaughlin’s work:

“Deliberately neutral in character, John McLaughlin’s forms might be described as anonymous. Essentially color serves him as a means of defining and regulating a form’s relative importance in the composition. Each painting represents the outcome of a process of refinement.”

John McLaughlin has long been acknowledged as one of the most important artist of the post war period in Southern California.  His commitment to creating pure abstractions that are totally devoid of any connection to everyday experience established him as one of the foremost innovators of total abstraction and a pioneer mapping the terrain for generations of artists to come.