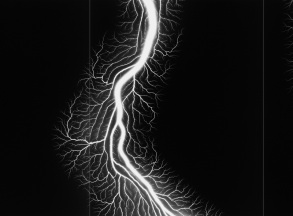 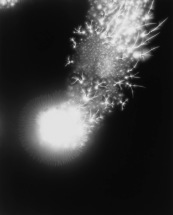 IN 2008, acclaimed japanese photographer Hiroshi Sugimoto bypassed the use of his camera and exposed his Lightning Field series directly onto film.  In order to witness what early scientists like Benjamin Franklin saw upon the discovery of electricity, Sugimoto used a Van de Graaf generator to send up to 400,000 volts through film to a metal table.

‘The resulting fractal branching, subtle feathering, and furry whorls call to mind vascular systems, geologic features, and trees. “I see the spark of life itself, the lightning that struck the primordial ooze,” Sugimoto says. Although some of the effects happen by chance, the artist does try to exercise control. “I have a kitchen’s worth of utensils that produce sparks with different characteristics,” he says. “But there are many variables — weather, humidity, perhaps even what I had for breakfast — I’m never sure what influences the results.”-Jon J. Eilenberg, Wired Magazine, 12.21.09

Here is a statement from Hiroshi Sugimoto discussing his Lightning Field series: