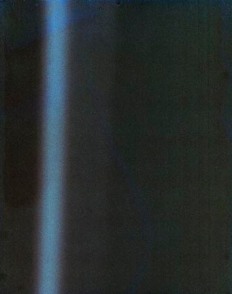 Walead Beshty‘s Travel Pictures lay bare the politics of travel in a post-9/11 world. His abstract photogram-like color fields are created by running large format negatives through the x-ray machines at various airports throughout the course of his travels. The machines irradiate the negative and in some literally expose the film. However, the exposures are uncontrollable and unpredictable; color and composition are not in the hands of Beshty, but rather in no hands at all. Instead, the penetrating invisible forces of the technology used to scan, investigate and examine our bodies and luggage from the inside out become the creators. Beshty’s interaction (and dare say, collaboration) with the x-ray machines inspired a closer look at the effects of exchange: of goods, of hands, of space, and of import.~1

The series of large-format photographs documents an abandoned Iraqi diplomatic office located in former East Berlin, itself vacated to the West by the German Democratic Republic in 1990. Before photographing the site, Beshty’s unexposed film was damaged by airport security X-ray machines while traveling to Berlin. Having discovered this, he proceeded to use the film and pass it through the scanners once again on his return journey. This generated images with “large washes of color … superimposed over them” of a site “denatured of its sovereignty and exposed to the elements,” The set of nine works was first shown at the Hammer Museum in Los Angeles in 2006, and has been shown in exhibitions worldwide including in the 2008 Biennial Exhibition at the Whitney Museum of American Art in New York. In 2012, the artist hole-punched the original nine negatives from the series, and prints of these works, under the title Travel Pictures, were shown alongside the original series at Thomas Dane Gallery in London.~2