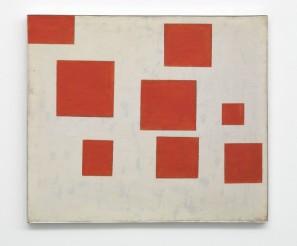 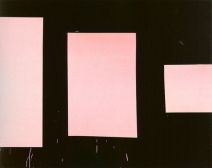 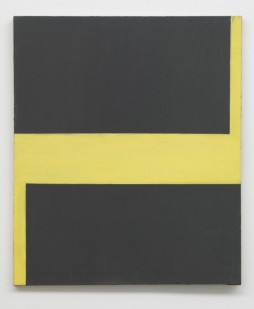 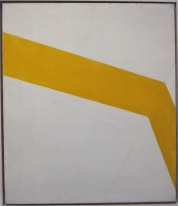 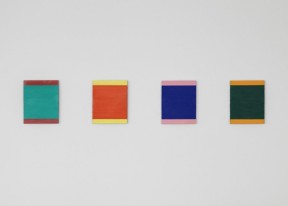 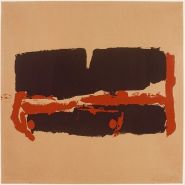 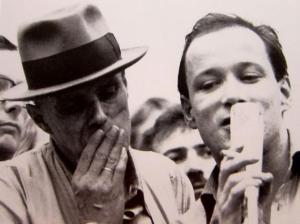 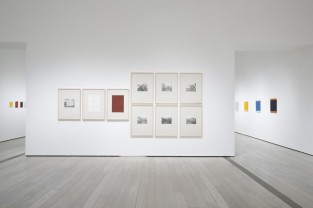 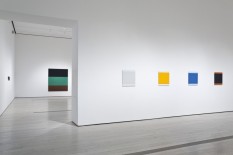 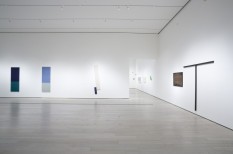 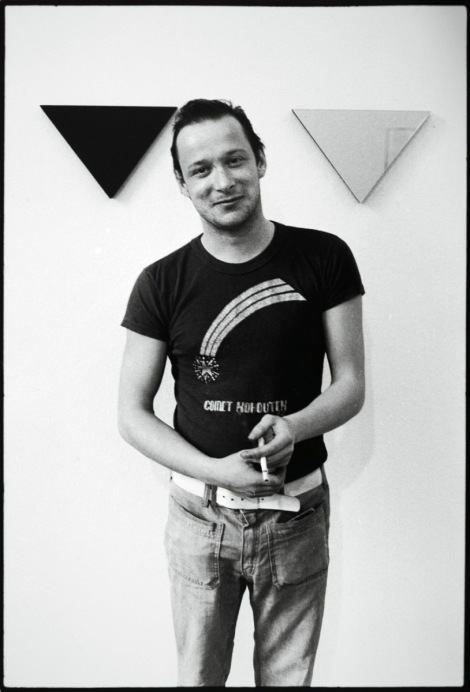 Palermo was born Peter Schwarze in Leipzig, Germany, in 1943, and adopted as an infant, with his twin brother, Michael, by foster parents named Heisterkamp. He adopted his outlandish name in 1964, during his studies with Bruno Goller and Joseph Beuys at the Kunstakademie Düsseldorf between 1962 and 1967. The name refers to Frank “Blinky” Palermo, an American Mafioso and boxing promoter who managed Sonny Liston.

IN 1964, A SHY, 21-YEAR-OLD German artist named Peter Heisterkamp enrolled in Joseph Beuys’s class at the Kunstakademie Du�?sseldorf, where a fellow student observed that he resembled an infamous American boxing promoter named Blinky Palermo. The name stuck, not only due to the slight physical resemblance, but also because a recent evolution in the young man’s paintings toward geometric abstraction required a nom de guerre, as later recounted by his teacher: “Heisterkamp might do for the old paintings, but this kind of art would have to involve a completely different name.”1 The significance of Palermo’s early artistic transformation—and by extension the impact of Beuys’s tutelage—is now readily apparent in an excellent traveling retrospective, which presents much of his work for the first time in the United States.

Organized by Lynne Cooke, curator-at-large of the Dia Art Foundation (and chief curator at the Reina Sofía in Madrid), “Blinky Palermo: Retrospective 1964-1977” features the four main bodies in Palermo’s oeuvre: the sculptural paintings known as the Objects; the stitched-together Stoffbilder (Cloth Pictures); the in situ wall drawings and paintings (seen here in photographs); and the acrylic-on-aluminum Metallbilder (Metal Pictures). The artist made the first three groups roughly concurrently before he turned to the final one, which he focused on from 1974 until his unexpected death, at 33, in 1977. As noted by Cooke, Beuys considered Palermo’s work to have a great “porosity,”2 by which he may have meant that it remained open to artistic influences. These influences are diverse;

Palermo’s familiarity with contemporary American art is frequently cited by scholars, and indeed the color chords and fields of Barnett Newman and Ellsworth Kelly, for instance, are appreciable in the Stoffbilder. But the artists that Palermo most consistently and productively engaged with are the early pioneers of utopian, nonobjective painting—most notably, Kasimir Malevich.

Malevich believed that feeling was humanity’s most vital shared experience, and that it could not be conveyed sufficiently in representations of objective reality. Thus, he renounced the three-dimensional world and, beginning with his then-infamous Black Square (1915), pursued qualities of geometry, color and composition in flat pictures that were meant to evoke the “supreme” reality of pure feeling.3 While Suprematist principles appealed to Palermo, he also doubted the viability of such faith in the abstract. If there was a constant in his too-brief career, it was his desire to test and tease the redemptive abstraction of the past so as to reconcile it with (or to make sense of) a redemptive tendency in the art of the present, particularly Beuys’s sculptures and actions in the 1960s. This desire is demonstrated best by Palermo’s Objects, which he began creating while still studying at the Kunstakademie.

DURING HIS FIRST TWO YEARS in Beuys’s class, Palermo produced several oil paintings on canvas stretched over traditional wood supports. These works reveal the significance of his visit, in 1964, to the Stedelijk Museum in Amsterdam, where he viewed the institution’s impressive collection of paintings by Malevich. Despite having obvious stylistic parallels, however, Palermo’s compositions are no mere analogues. His 1964 version of Malevich’s 1915 painting 8 Red Rectangles, for example, eliminates the variety of shape and the diagonal motion of the composition, in which a geometric collective appears to have been launched toward the upper-right corner. Palermo’s quadrilaterals are rendered on a slightly downward horizontal axis, and in more equalized dimensions—they are only slightly more elongated than squares—giving the impression of having been chastened.

In humbling a Suprematist work designed to convey maximum feeling, Palermo recalls his teacher’s flat-footed 1962 painting Drei Wimpel (Three Pennants). Beuys’s pennants appear in a stuttering sequence, toward the top of an otherwise blank piece of cardboard. Each consists of two triangles: an isosceles standing, point to point, on a much smaller equilateral. The triangle would soon acquire three-dimensional mass and a more ritualistic tone in Beuys’s work, however, when he began incorporating wedges of fat in sculptures and performances, positioning them in the corner of a cardboard box and on the seat of a chair or using them to mark the boundaries of an action.

Palermo was, of course, familiar with his teacher’s usage of the triangle, and in 1965 he produced his own work, titled Tagtraum I (Daydream I), that renders the basic form in three dimensions, liberating it from the bonds of revolutionary painting. The shape appears twice in the wall-hung piece: painted on the surface of an object that, in its color and fabric quality, recalls a life jacket; and again in isolation just off to the right of this composition, as a shaped canvas. The two triangles—identical in their size and viridian color and positioned at the same height—are clearly meant to be duplicates, the right-hand one seeming as if it had been plucked from the flat composition beside it. That Palermo was performing an act of historical evocation with the triangle (as Beuys was doing in his own work) is likely, but it is hard to know whether he meant ultimately to “save” the nonobjective icon or—by casting it out from the canvas and turning its mystical geometry into something solid and tangible, not to mention a bit rough and ragged—to sink it.

IN 1968, PALERMO CREATED Blaue Scheibe und Stab (Blue Disk and Staff), two objects wrapped in blue fabric tape and leaned against the wall. The work touches upon a number of contemporaneous artistic approaches, including the employment of a wrapping technique (recalling Eva Hesse’s Hang Up, 1966), of shaped supports that integrate form and picture (as in Frank Stella’s paintings), and of self-effacing or provisional materiality (as in the work of Richard Tuttle, who that year had exhibited irregularly shaped pieces of dyed cloth at Galerie Schmela in Du�?sseldorf). It is also known that Palermo attended a number of Fluxus events at this time, as well as a musical performance by John Cage and a dance performance by Robert Morris and Yvonne Rainer. Beuys later recalled that Palermo was “tremendously fascinated” by these performances, but he added, curiously, that the young man “despaired” over such actions because he fretted over the unlikely possibility “of getting things going again.”

The meaning of Beuys’s recollection (which, of course, is not Palermo’s own) is not entirely clear, but the despair he notes might suggest that Palermo lacked confidence in the contemporary avant-garde and its ability to make radical political and artistic progress. Gerhard Richter, a friend of Palermo’s at the Kunstakademie, later recalled that students found the 1963 Festum Fluxorum Fluxus sponsored by Beuys—one of several Fluxus festivals of Dada-esque events, actions and performances—“shocking absolutely shocking” and “very cynical and destructive.”4 Although Richter does not specify which works he and his peers found troubling, it is hard to imagine that the first movement of Beuys’s Siberian Symphony was not among them: during this action, the artist ripped the heart out of the body of a dead hare and ceremoniously hung it on a blackboard intersected by painted rods.

Against Beuys’s occultlike performative works Palermo’s Objects stand in relief, as if the artist were seeking a more concrete way of pursuing iconic forms and one that remained directly tied to the Suprematist past. His blue disk and staff were likely meant to be in dialogue with Beuys, who the year before had created the sculpture-prop Eurasienstab (Eurasian Staff) and the year before that had performed Manresa—a convoluted action in which he employed, among other items, a gold cardboard disk and half of a vertically bisected Latin cross. Palermo’s presentation of the primitive formal coupling of circle and line, however, is more firmly rooted in Suprematism—specifically, in Malevich’s Painterly Realism of a Football Player—Color Masses in the 4th Dimension (1915), which was on view at the Stedelijk during his 1964 visit. A green circle and a red line serve as the foundation of the composition, the latter appearing to balance precariously on top of the former. Palermo’s work equally evokes Malevich’s Suprematist Painting, Rectangle and Circle (1915), although if he knew the painting, it was through reproduction (since it was held then by the Busch-Reisinger Museum at Harvard University). Given Palermo’s concurrent experiences with Malevich and with Beuys, Blaue Scheibe und Stab can reasonably be interpreted as a Doubting Thomas’s investigation of those artists’ weighty iconography. Unlike the triangles of Tagtraum I, however, the circle and line seem to acquire an affirmative pageantry thanks to the artist’s uprighting of the forms and his giving them a bright uniform color (one that merges a Suprematist motif with a more contemporary precedent, since it was the trademark hue of Yves Klein, who was extremely influential in Du�?sseldorf during the early 1960s).

The stafflike object in Beuys’s Manresa was, again, half of a Latin cross, and thus it doubly conjured Malevich, who had also represented Latin, Greek and T-shaped crosses in his two-dimensional compositions. The same year Beuys performed this work, Palermo wrapped a large wooden T with ramie fiber, painted it red and hung it on the wall; and over the next seven years, he would return to this shape on at least four more occasions. He also drew from works by Russian avant-garde artists apart from Malevich and who were not being evoked contemporaneously by Beuys. The intersecting painted timbers comprising an untitled piece from 1967, for example, suggest a remnant of Vladimir Tatlin’s famous Constructivist tower Monument to the Third International, as if Palermo were giving form to a historical work known mostly in two dimensions. (The tower was never built, and is seen mainly through photographs of models for it.)

One of the earliest essays published on Palermo was written by the composer Henning Christiansen, who used the Objects to help cast the artist as a Romantic; in addition, the art historian Christine Mehring has traced these works to a Romantic concept of the fragment in a convincing fashion. But the artist’s most immediate influence, Beuys, may better explain the Objects’ engagement with nonobjective esthetics of the early 20th century. Palermo treated these works as a means of participating in an exchange between the redemptive abstract iconography of Beuys and the geometric remains of a lost revolution.

DAVID DUNCAN is an artist and doctoral student in art history at the Graduate Center, City University
of New York.