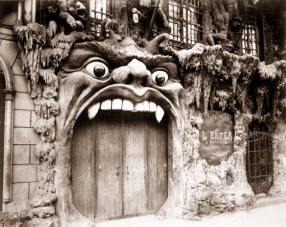 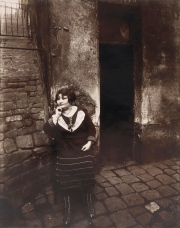 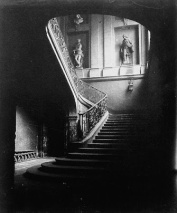 “…I have assembled photographic glass negatives… in all the old streets of Old Paris, artistic documents showing the beautiful civil architecture from the 16th to the 19th century. The old mansions, historic or interesting houses, beautiful façades, lovely doors, beautiful panelling, door knockers, old fountains, stylish staircases (wrought iron and wood) and interiors of all the churches in Paris… This enormous documentary and artistic collection is now finished. I can say that I possess the whole of Old Paris.” -Eugène Atget, 1920

“The first time I saw photographs by Eugène Atget was in 1925 in the studio of Man Ray in Paris. Their impact was immediate and tremendous. There was a sudden flash of recognition – the shock of realism unadorned. The subjects were not sensational, but nevertheless shocking in their very familiarity. The real world, seen with wonderment and surprise, was mirrored in each print.”-Berenice Abbott, 1964

Atget was not particularly well known in his lifetime, but in the 1920s the aging photographer came to the attention of modern art’s avant-garde. Man Ray, an expatriate American photographer and painter who was associated with the Dada and surrealist movements, met Atget between 1921 and 1924, in all likelihood because Man Ray’s studio was a few steps down the street from Atget’s apartment. Atget’s images, which simultaneously appear real and dreamlike, appealed to Man Ray’s surrealist sympathies, especially his interest in the outmoded; he bought about 50 photographs and in 1926 had four of them reproduced in a surrealist journal, La Révolution Surréaliste.

“Man Ray encouraged others from his artistic circle to visit Atget. Julien Levy, an American filmmaker, bought as many Atget prints as Atget would permit, eventually exhibiting them at a gallery he would open in New York. American photographer Berenice Abbott, then Man Ray’s assistant, visited Atget four or five times, buying prints and persuading him to sit for aphotographic portrait

in 1927. When Atget died, his executor and close friend, André Calmettes, ensured the photographer’s legacy by dividing the negatives and prints between the French government’s Commission des monuments historiques and Berenice Abbott; as Abbott herself became a towering figure of 20th-century photography, she continued to work throughout her career to promote Atget, even making prints from his negatives.” -the National Gallery of Art, Atget

Eugene Atget not only devoted his life to chronicling the often-overlooked urban landscape of Old Paris, but he also received little recognition for his works during his lifetime.

“The Frenchman was born into a working-class family, but was orphaned at a young age. In his early days, he went to sea, served in the military, and unsuccessfully tried his hand at acting. Atget stumbled into photography as a commercial endeavor when he couldn’t find the resources to break into painting. He toted his tripod-equipped, standard-box camera around Paris, eventually taking around 10,000 photographs. However, he did not consider himself a photographer. He referred to his photographs as documents, and viewed his systematic chronicling of urban landscapes as record-making.

Professionally, Atget found a niche by selling various photos to painters before he began focusing on the rapidly-urbanizing Old Paris. His systematic approach efficiently captured images of a changing city, including its narrow, winding alleys, storefronts, and the occasional prostitute. As Atget’s career progressed, he grew less dedicated to his chronicling-focused style of photography. His output continued to dwindle throughout World War I and he sold most of his negatives of Paris to the government in 1920.

Eugene Atget’s later metaphor-tinged works found a small audience among Surrealists such as Man Rey, but his legacy is using an unmanipulated approach that diverged from the painterly styles of his colleagues. Unfortunately, he was not very well known for his work during his lifetime. Atget was a very private person, and his posthumous success is largely due to the efforts of Berenice Abbott. An American photographer, Abbott swooped in and saved Atget’s work from sinking into obscurity when she acquired Atget’s estate at his death. She was responsible of exhibiting Atget’s works outside of France, and many of his existing prints actually stem from the negatives that Abbott developed in the 1930s. Today, the estate is in the hands of the Museum of Modern Art in New York”-alley connoisseur.com