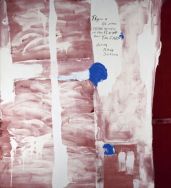 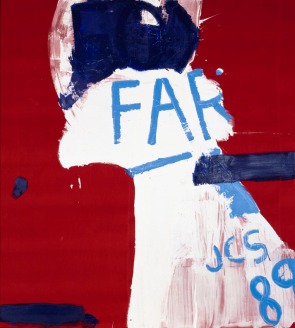 27 years ago, in December 1989,  Julian Schnabel showed a new series of paintings at The Pace Gallery which was coined by critic Thomas McEvilley  as “The Fox Farm Paintings”. The paintings took a variety of shapes and forms but all were painted upon a deep, red velvet and incorporated the text: ”There is no place on this planet more horrible than a fox farm during pelting season.”

Below is a republished review of the show by Roberta Smith, for The New York Times:

With his new paintings, Julian Schnabel should get some credit for showing up where he is least expected. The master of conspicuous pictorial consumption – famous for painting on surfaces made of broken plates or pot shards, fatigued tarpaulin or Kabuki theater backdrops – is now making paintings that criticize such consumption.

Not surprising for an artist of Mr. Schnabel’s complexity and contradiction, this new series remains characteristically flamboyant in its use of materials and wall space. It is not exactly ecologically sound, nor does it hold up esthetically either.

The paintings have been carried out over vast expanses of velvet, a staple that has served Mr. Schnabel well in the past. This time the velvet is a deep royal red, sloshed intermittently with gigantic pours and brushstrokes of glowing white with occasional touches of blue or yellow. They have, among the six on view and the additional six reproduced in the catalogue, moments of a raw nonchalant beauty that is by now second nature to their maker.

But their most prominent feature, the one that adds a punchy and rather fashionable message to the medium, is a phrase Mr. Schnabel found written in red ink on a $10 bill received as change, ”There is no place on this planet more horrible than a fox farm during pelting season.”

Writ large or scrawled small, this phrase is repeated in whole and sometimes in part on each surface, forming a kind of environmental mantra. It is, of course, the latest in the long line of found artifacts, materials, words and cultural figures Mr. Schnabel has pressed into service in his art. Its pungent ready-made poetry, its intimations of folk art and its global overstatement fit his sensibility to a T – suggesting in fact a title he might have conjured up himself.

In a catalogue essay that makes the best possible case for these works, Thomas McEvilley points out that Mr. Schnabel was among the first to orchestrate the fusion of form and literary meaning that is a hallmark of 1980’s art. He also suggests that the new works constitute the artist’s way of coming to terms wtih AIDS and the pollution of the planet.

In front of the paintings themselves, Mr. Schnabel’s environmental concerns have, if not a hollow ring, a definitely comic aspect. (This is, after all, an artist who has occasionally painted on cowhide.) The works are typical of his tendency to catapult genuine emotion into the realm of self-parodying melodrama, and to treat the painting surface – to mangle the critic Harold Rosenberg’s phrase – as an arena in which to overreact. This is too bad. As his last two shows in this gallery have confirmed, when Mr. Schnabel speaks in a gentler, lighter voice, he can produce extraordinary paintings.

In addition to being neither gentle nor light, these new paintings reveal the artist in a visual holding pattern. They are rife with ghosts of Schnabels past, particularly his ”Mutant King” and ”Maria Callas” series – which were not his best efforts to begin with – as well as the wandering souls of various Abstract Expressionist motifs.

Unvarying in palette, material or motif, they also have a visual monotony that is unusual for Mr. Schnabel. It speaks of surplus and excess, of needless repetition and work produced in one fell swoop. By now, most people understand that environmental consciousness, like charity, begins at home.

The Spanish artist Antonio Tapies is known for gestural abstract paintings of the Tachist persuasion, so these sculptures, made from 1969 to 1973, may come as something of a surprise. Although Mr. Tapies regularly adds unusual materials, like concrete, to his painting surfaces, these pieces show only minimal signs of artistic intervention. Alternately redolent of the construction site or the studio floor, they have a spontaneous, poetic energy.

They are not original. They may reflect an attempt to keep up with the times – with the art of the West German artist Joseph Beuys or the younger Arte Poveristi emerging in Italy in the late 1960’s. They may reflect a sympathy with the common worker inspired by the strikes and demonstrations of May 1968 in Europe.

One of the best is a handkerchief knotted at the corners as if used to shade a bricklayer’s head and filled with crumbled papers that might have held a bricklayer’s lunch – a modest yet effective tribute to a day’s labor. Even stronger and decidedly more enigmatic is ”Bras Bande,” a disembodied bandaged arm in a sling that hangs from a plank of wood like an amulet.

Despite their derivations, these works are consistent with, and perhaps even preferable to, many of Mr. Tapies’s paintings. They have also held up well over time, and dovetail nicely with the widespread interest among today’s young artists in discarded and devalued materials.