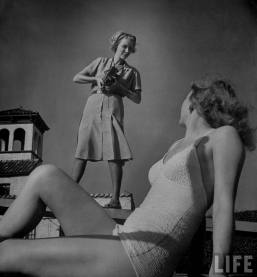 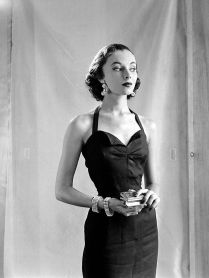 Members of the Young Women’s Republican Club of Milford, Conn., explored the pleasures of tobacco, poker, the strip tease and such other “masculine” enjoyments. Here, the women play poker and smoke. 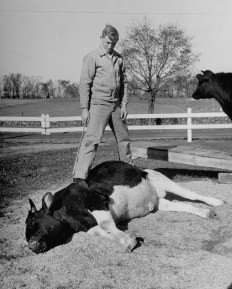 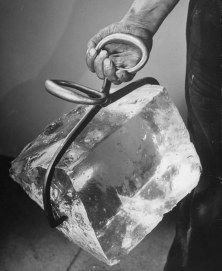 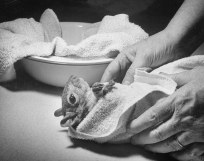 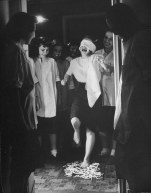 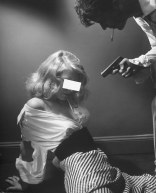 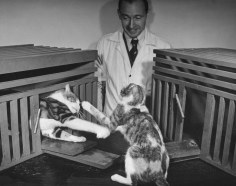 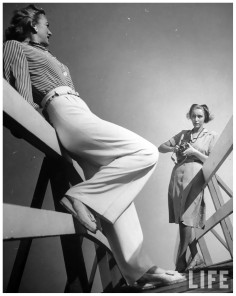 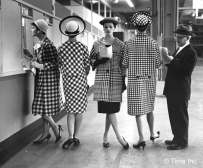 Nina Leen’s life, from early on, was one in which travel played a key role — a life that, in retrospect, had something of a purposefully nomadic quality. Born in Russia (the date of her birth is unknown, as she adamantly refused to reveal or even discuss her age), Leen grew up in Europe. She studied painting in Berlin before emigrating to the United States in 1939. With her first camera, a Rolleiflex, she honed her photography skills, teaching herself how to take pictures — and developing what would become her signature style — by creating at-once intimate and stylized portraits of animals at New York’s Bronx Zoo.

In fact, the first pictures she published in LIFE were a series of photos of ancient, combative tortoises (see slide #6 in this gallery) that she made at the Bronx Zoo and subsequently, at the urging of friends, submitted to the magazine. LIFE published the pictures in its April 1, 1940 issue, launching Leen’s relationship with the preeminent photography magazine of the age. (Interestingly, while she is often described as “one of the first women staff photographers at LIFE,” Nina Leen was never, in fact, officially on the staff of the magazine. Instead, she was a contract photographer who enjoyed an astonishingly long working affiliation with LIFE — one that lasted from the 1940s until the magazine ceased publishing as a weekly at the end of 1972.)

Leen produced a vast and varied body of work during the three decades she shot for LIFE, including more than 50 covers and countless reports and photo essays from around the world. But perhaps the single assignment that had the most lasting effect on her own life and work was actually one on which her colleague Leonard McCombe was the photographer. In 1949, McCombe was covering a story in Texas when he came across a dead dog and its cowering, flea-ridden and filthy — but still very much alive — puppy.

McCombe, unable to simply abandon the creature, shipped it off to the LIFE offices in New York, where Leen — who was well-known for liking animals far more than she liked most humans — adopted it. In very short order the dog, dubbed “Lucky,” became America’s pet. Nina brought Lucky with her everywhere, documenting the dog’s post-rescue adventures in follow-up articles, a book (and book tour) and even a short film.

A great animal lover whose pictures of dogs, cats, bats (she had a special affinity for and obsession with the furry flying mammals) and other creatures could, and eventually would, fill entire books, Nina Leen also had a way with those other wild things: teenagers. Her numerous essays on the fads, etiquette and attitudes of the American teen captured the younger generations of the ’40s and ’50s with a winning mix of bemusement and empathy. She was also one of the most prolific and accomplished fashion photographers LIFE ever had, covering Paris shows in the 1940s, for example, with a cool, discerning eye.

That she was not limited to photographing animals and hormonally addled youngsters, however, is evidenced by two of her most famous group portraits: one, a picture featuring four generations of an Ozark family (selected by Carl Sagan to fly aboard the Voyager space probe as part of a message, of sorts, to any extraterrestrial civilization who might intercept the spacecraft); the other a photo of “The Irascibles” — a now-legendary group of artists including de Kooning, Pollock, Rothko and others (see slide #8) who protested the Metropolitan Museum’s refusal to include Abstract Expressionist works in a major 1950 retrospective of American painting.

After LIFE folded (for the first time) in 1972, Nina Leen’s career hardly slowed. Throughout the 1970s she produced an average of two books a year, and published 15 in her lifetime — including a groundbreaking work on her beloved bats. Nina Leen died on January 1, 1995, at her home in New York City. A spokesperson for LIFE said that she was in her late 70s or early 80s — but no one really knows for sure.