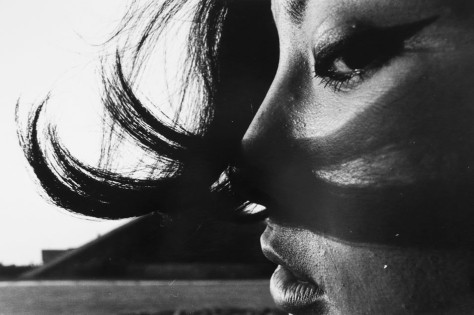 “Akira Sato, the Japanese photographer, was noted for his graphic and iconic experimental photographs of women. His seminal book, also entitled Woman, is an enigmatic collection of portraits finely meshed with a type of fashion, but as with all things Japanese, his work retained an exotic quality that was to define his style. Sato was born on July 30, 1930 in Tokyo. While a student of economics at Yokohama National University he was an avid reader of LIFE and other photographic and fashion magazines at the American CIE library in Hibiya. He graduated in 1953 and one year later made the move and became a freelance photographer, specializing in fashion. From around 1956 he was caught up with new trends in photography, and he participated in the seminal 1957 exhibition ‘Junin no me’ (Eyes of Ten), with a key group of other Japanese photographers, who are today considered to be the most influential photographers of the late 20th Century: Yasuhiro Ishimoto, Kikuji Kawada, Shun Kawahara, Akira Tanno, Shomei Tomatsu, Toyoko Tokiway, Masaya Nakamura, Ikko Narahara and Eikoh Hosoe. He subsequently joined the famous collective, Vivo. Vivo was one of the most influential movements in Japanese photography, not only because of the artistic quality of its members but the next generation of photographers as well, many of whom assisted the Vivo members, including Daido Moriyama and Nobuyoshi Araki. Sato had a series of one-man shows starting in 1961, alongside publications within the camera magazines. He specialized in black-and-white photographs of girls: their faces in close-up.  In 1963, Sato went to the US, where he was famously mugged one night, and then to Europe. Sato returned to Japan in 1965. Sato died on April 2, 2002. His prints are extremely rare and sought after and up until now have lain hidden away.” – pdnonline.com, Japanese Legend Akira Sato’s Prints Resurface, April 10, 2014